The importance of snakes

Some blind snakes are only the size of an earthworm.

Snakes: covered in a skin of supple, living scales; legless; with staring eyes that never blink or close; a flickering forked tongue; and, sometimes, fangs that deliver toxic venom.

Snakes inspire fascination and feelings in a way that no other type of animal can.

These long, legless reptiles play an important role in the natural environment and food webs. Effective hunters and ambush predators, snakes use their highly-developed senses of sight, taste, hearing and touch to locate, recognise and track their prey. Some snakes use a lethal dose of venom, a modified saliva, to paralyse and kill their prey while others use their powerful muscular bodies to squeeze their prey to death.

Snakes are highly mobile creatures, able to move over sand and rocks; burrow in the soil; squeeze through cracks and crevasses in rocks; climb near vertical rock walls and the thinnest tree branches; and even swim at great speed- all without limbs!

There are many different types of snakes in Australia, from those that could easily be mistaken for an earthworm through to giant pythons as thick as a man's leg. They come in a kaleidoscope of colours and patterns, mostly mirroring their surroundings, with a few brightly banded and flecked, or giving off a brilliant sheen in sunlight. Snakes inhabit the full range of Australian environments from the rainforest to the outback, freshwater streams to the ocean, as well as our backyards. 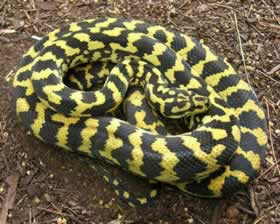 A jungle carpet python showing off its bright yellow markings.

Snakes are among the least popular of animals. Along with spiders, leeches and other 'creepy-crawlies', people often perceive snakes as animals to fear and hate. In the case of snakes and spiders, some are also venomous, with a few having the potential to kill. This has lead to the belief that 'the only good snake is a dead snake' - the vast majority of spiders suffer the same stigma, and the same fate.

Snakes usually prefer to retreat when encountered but can become defensive if threatened. Most snake bites are received by people who try to capture or kill a snake.

When left alone, snakes present little or no danger to people.

The importance of snakes: conservation and protection

Some snake species have become threatened due to land clearing for agriculture, urban development and through the introduction of animals such as domestic pets and the cane toad. Maintaining a high level of biodiversity is important to all life on Earth, including humans, and snakes are an important part of that biodiversity. In Australia, we forget that snakes and other reptiles make up a significant proportion of the middle-order predators that keep our natural ecosystems working. Without them the numbers of prey species would increase to unnatural levels and the predators that eat snakes struggle to find food.

Along with all Australian animals, snakes are protected under the Nature Conservation Act 1992 and cannot be killed or taken from the wild. Snake-keeping in Queensland requires a licence from Queensland Parks and Wildlife Service. Only snakes bred in captivity by a licensed person can be purchased.

Want to know more about snakes? Begin by finding the answers at frequently asked questions. Visit the Queensland Museum to find out even more. 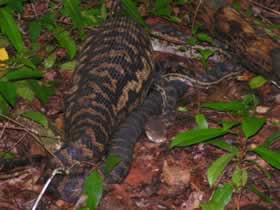 This amethystine python has just eaten a wallaby.

Snakes are an important component of the natural environment and are commonly encountered in urban areas throughout Queensland. Many species have adapted extremely well to living with humans. We can also adapt to live safely with snakes. Why not check out the links below to learn more about living with snakes.

Around the world there are more than 2600 species of snakes, and Queensland is home to 120 of them.

Fossil records show snakes evolved over 130 million years ago during the Cretaceous period. Snakes and other reptiles, along with birds, are regarded as having a single evolutionary lineage and at one point in the past shared a common ancestor.

Cloacal spurs just in front of the junction between the body and the tail of boas and pythons, are visible remnants of hind limbs and a reminder that snakes evolved from a legged reptile.

Some snakes can see in the infrared spectrum using heat receptors called pit organs, making them highly effective night predators of warm-blooded animals. Many pythons such as the carpet snake, amethystine python and children's python also have a series of labial pits on the sides of their lower jaws that can sense heat.

Snakes can swallow food larger than their heads. The lower jaw of a snake is only loosely attached to the skull, allowing snakes to open their mouths very wide. As an extra adaptation, the lower jaw bones of snakes are not joined together at the front. This allows each side of the lower jaw to move independently and helps the snake to stretch its mouth over large prey. Then the snake gradually 'walks' each side of its jaws over the prey until it can be swallowed.