Description: Growing up to 1 m (but typically around 75 cm), this snake is usually light to reddish brown and paler on the lower sides. It has numerous dark blotches that are smooth edged and roughly circular. Its pattern is usually weak or sometimes absent on adults but fairly prominent on juveniles.

The children's python may take over an abandoned burrow for a home, or hide in hollow timber. It can also be found hanging out in trees, caves and crevices. They inhabit coastal woodlands and forests to the dry centre, outcrops and escarpments.

They can be found in the extreme north in Western Australia, Northern Territory and north eastern Queensland, as well as some islands in the Torres Strait. 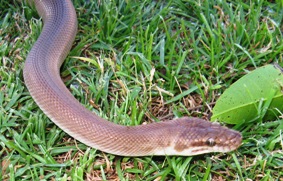 As with other pythons this non-venomous snake constricts its prey before swallowing it whole. Pythons have loose articulated skull bones and small body scales that allow them to swallow large prey.

A nocturnal snake, the children's python prefers to stay on the ground hunting small mammals, birds and reptiles. They also feed on microbats which they catch by dangling from stalactites in caves and snatch them out of the air as they fly past. It locates warm blooded prey using heat-sensitive pits along its jaw.

The children’s python lays eggs with the female staying coiled around them until they hatch to keep them warm and protect them from predators.