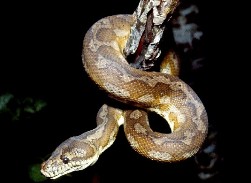 Description: Carpet pythons can be intimidating as they can grow up to 4 m in length (though most don't exceed 2.5 m). They are secretive and well camouflaged with olive to brown skin with cream blotches which allows them to hide among leaf litter in tree hollows, logs and rocky crevices.

Carpet pythons live almost everywhere in Australia except Tasmania. They live in a range of habitats from the wet tropics to near arid desert. Look out for them in undergrowth, in tree branches, or the roof of your house or shed.

Carpet pythons have a high-tech tracking system for finding their food. Heat-sensitive pits on their bottom jaw let them sense and track the body warmth of other animals. They hunt by ambush, waiting for their prey to pass by. As they are non-venomous, when they catch their prey, they suffocate it by constricting it and then swallow it whole. Carpet pythons mostly feed after dark, and eat smaller animals such as rats, possums and birds. Smaller carpet pythons prefer to feed on lizards.

Female pythons lay up to 20 eggs at a time, which they coil around to guard until they hatch. Once the young emerges from the egg it is independent and looks after itself.