The word koala is said to come from the Dharug peoples (whose traditional lands span the area from Parramatta to the Blue Mountains of New South Wales) word meaning ‘no water’. In South East Queensland, koalas are called dumbirrbi in the Jagera language, marrambi in the Yugarabul language, borobi in the Ugambeh language, and dumbribbi in the Turrbul language.

Koalas are a type of mammal called marsupials, which give birth to underdeveloped young. They are so different from any other marsupial, however, that they have been classified into their own family, called Phascolarctidae. They share a number of characteristics with wombats, who are their closest living relatives, including a backward-facing pouch.

In February 2022 the status of the koala has recently been changed from vulnerable to endangered. The change in status means an increased level of protection for koalas in Queensland, New South Wales and the Australian Capital Territory. 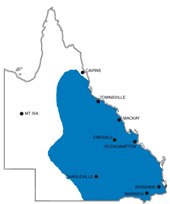 Estimated distribution of koalas in Queensland 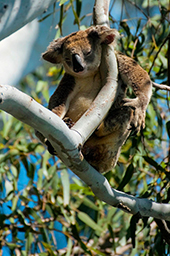 Koalas live over a range of open forest and woodland communities but ultimately their habitat is defined by the presence of a select group of food trees. Koalas are found in higher densities where food trees are growing on more fertile soils and along watercourses. They do, however, remain in areas where their habitat has been partially cleared and in urban areas.

The distribution of koalas covers much of Queensland, New South Wales, Victoria and a small area in South Australia. Over the past 200 years, their distribution does not appear to have reduced, however, individual koala populations have declined. Local extinctions have occurred due to clearing and fragmentation of eucalypt woodlands and forests for agriculture and human settlement. Fossil records indicate that many years ago, the koala inhabited parts of Western Australia and the Northern Territory. There are no fossil records of koalas ever living in Tasmania.

In Queensland, the greatest concentration of koalas is in South East Queensland where they now compete for space with a rapidly growing human population.

Koalas are well-known for their large round head, big furry ears and big black nose. Their fur is usually grey-brown in colour with white fur on the chest, inner arms, ears and bottom. They have no fur on their nose or the palms of their paws. Koalas have particularly hard bottoms, which is similar to their closest relative, the wombat. For the koala, this feature enables them to wedge comfortably in tree forks for long periods of time, whereas the wombat uses its hard bottom as a defence mechanism.

Koalas have poor vision and rely heavily on their other senses. They have excellent hearing which helps them detect predators and other koalas. They have an acute sense of smell which also helps them detect other koalas and their favourite food trees. The male uses a scent gland on his chest to mark trees and attract females, by rubbing his chest up and down the trunk. The gland oozes a clear, oily, strong musky smelling liquid. 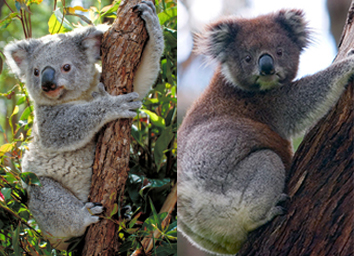 A matter of size

The size, colour and shape of koalas differs slightly across eastern Australia. Koalas in Queensland are smaller, lighter in colour and have less fur than those in New South Wales, Victoria and South Australia. Queensland's adult female koalas on average weigh between 5 and 6kg and adult males weigh between 6 and 8kg, compared to Victoria’s adult female koalas with an average weight of 8.5kg and adult males 12kg. 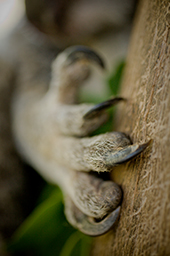 Koala claws are good for climbing Koalas have strong arms, powerful legs and sharp claws suitable for climbing trees. Koalas are arboreal (tree dwelling) mammals, however, they do climb down to the ground to move between trees. When koalas are on the ground, they walk slowly as they are poorly adapted to walking on the ground, however when disturbed koalas can break into a bounding gallop, moving at speeds of up to 30km per hour.

They have two opposable thumbs on their fore paws, allowing them a better grip—essential for climbing smooth barked gum trees. When climbing, koalas leave behind characteristic scratches in the bark, which remain visible until the bark is shed each year, allowing you to gauge how frequently koalas use that particular tree. Stringybark trees that have been regularly climbed by koalas will also have the outer layer of weathered bark scratched away, exposing the fresh layer beneath. 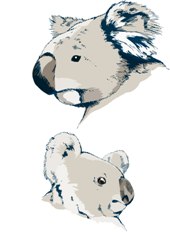 Difference between male and female koalas

Adult male koalas are noticeably larger than adult female koalas, with a broader face and distinctly larger black nose, and can easily be distinguished by the large scent gland on their chest.

Adult female koalas have a relatively clean white chest and a backward facing pouch for their young. This type of pouch protects their young from injury while moving around from tree to tree. This is a shared trait with wombats who use this to protect their young from being covered in dirt during when digging burrows.

Koalas eat a variety of eucalypt leaves and a few other related tree species, including lophostemon, melaleuca and corymbia species (such as brush box, paperbark and bloodwood trees). They consume around 500 grams of leaves each day, (approximately the size of a small lettuce) and obtain most of their water requirements from the leaves, which can contain up to 50% water. This removes the need for a koala to climb down a tree for a drink of water, except during very hot or dry periods. The leaves are also very low in energy comprising only 5% sugars and starches on average.

Eucalypt leaves contain many toxic compounds similar to that of cyanide, which most animals cannot eat. This unique diet is shared only with possum and gliders, and provides koalas with access to a relatively untapped food resource. Koalas are able to break down the toxic oils using a specialised digestive system. First, the leaves are ground into a paste by the koala's heavily ridged molars, allowing any nutrients to be absorbed in the stomach. Toxins in the leaves are isolated by the liver and excreted as waste in their urine and faeces. The residue is then broken down by specialised bacteria in an elongated, coiled sac (the caecum) that branches off the large intestine before any remaining nutrients are digested.

Koalas are not born with this bacteria in their system and need to acquire it from their mother when they are young. The mother passes on this bacteria by excreting a sticky runny faecal substance called ‘pap’, which the young ingests instinctively, providing it with the bacteria it needs to eat the leaves in adult life.

Koalas can sleep for up to 20 hours a day, due to their low energy diet, and the intense amount of energy required to break down toxic leaves.

Koalas are mostly active at night (nocturnal) and around dawn and dusk. However, they can be seen moving during the day if they are disturbed, get too hot or cold, or need to find a new tree.

Koalas are solitary animals living within a network of overlapping home ranges, which allows contact between individuals for mating. Males will try to establish dominance over the home ranges of a number of females during the mating season. These home ranges in southern and central Queensland vary in size from 1km to 135km, depending on the density of the population and the abundance of suitable food trees.

In spring, adult males begin to call as a way of advertising their presence to surrounding koalas. Males will seek out a mate and fight with rival males to establish their dominance.

The gestation period of a female koala is 35 days, after which she gives birth to a single joey. Female koalas are also capable of giving birth to twins, however this is quite rare. Birth usually take place between the months of November and February. The young stays in the pouch for the next six months before emerging for the first time. The joey will then spend between six and 12 months riding on its mother's back.

By 12 months of age, the young is weaned and takes up a home range, which overlaps with its mother, for much of the next year. Between the age of two and three years, these young disperse beyond their original home range to establish their own range, usually during the breeding season.

On average, koalas live for 10 to 12 years of age in the wild. Although females can continue to breed into their 'teens' and may live as long as 18 years; males are thought to have a slightly shorter lifespan.

Koalas are subject to a range of diseases which can affect their life expectancy. For example Chlamydia is a bacterial infection affecting many koalas in South East Queensland. The stress-related disease weakens the immune system and can cause blindness and reproductive tract disease which may render a female infertile. Koala infertility from Chlamydia infection is one contributing factor to the current decline in koala numbers.

How to spot a koala in the wild

Koalas are among the most easily recognised of all Australian animals, however, they often go unnoticed as they rest wedged in a tree fork, high in a gum tree. From the ground, a koala may appear to be little more than a bump on the tree itself.

The fur on a koala's bottom has a 'speckled' appearance which makes koalas difficult to spot from the ground. The easiest way to discover a koala resting in a tree involves looking down, not up. While a koala sitting in the crown of a tree can be difficult to see, its droppings on the ground are quite obvious. These are small green-brown, fibrous pellets about 20 mm long and as thick as a pencil. The fresher the pellets, and the more abundant, the more likely koalas are somewhere overhead.

Another sign that koalas are around is the distinctive call given by males during the breeding season over the summer months. The call is produced as the male 'snores' as he inhales and then gives a loud, deep roar as he breathes out. On a still night, the call can be heard almost a kilometre away. Females may also produce a low-pitched bellow similar to a male to indicate they are ready to mate. They will also 'squawk' and 'wail' during mating.