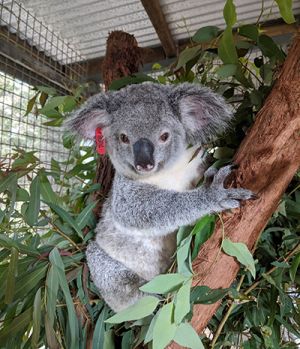 An orphaned koala joey being prepared for release back into the wild.

The Moggill Koala Rehabilitation Centre (previously known as the Moggill Koala Hospital) was opened in 1991 by the Queensland Government in response to public concern about the increasing number of injured and diseased koalas found in South East Queensland.

The centre is run by the Department of Environment and Science (DES) for the rehabilitation of sick, injured and orphaned koalas. The centre operates 365 days of the year but is not open to the public.

The centre is part of a network of wildlife facilities which includes: 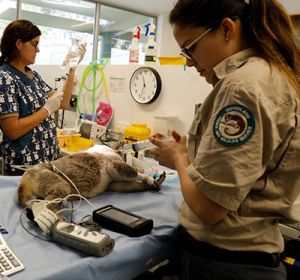 Koala under anaesthesia for veterinary examination.

Koalas are commonly admitted for treatment and/or rehabilitation for the following reasons:

Statistics are collected from all koalas and are entered onto a specifically designed koala database which now contains over 50,000 records. This information is used by the department to produce maps and reports which guide koala management decisions.

Koalas are received at the centre from:

Koalas that are rehabilitated at the centre include

As well as the wildlife hospital network, some koalas are also treated by private veterinary surgeons.

All admissions are recorded and the details forwarded to Moggill Koala Rehabilitation Centre staff who enter critical data into the database. This data helps to identify koala habitat and monitor koala populations.

Once rehabilitated, treated koalas are returned to their natural habitat at, or close to, their point of rescue. Each koala is microchipped so that it can be identified in the future. Unlike other more common wildlife, rehabilitation of a single koala back into the wild can make a significant difference to the survival of the South East Queensland koala population.