Daisy Hill Koala Centre will be closed on Wednesday 26 February 2020. We apologise for any inconvenience caused. 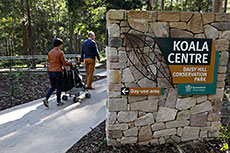 Built by the Queensland Government as a dedicated koala education facility, the Daisy Hill Koala Centre was opened to the public in 1995, extensively refurbished in 2009 and most recently in 2018. Nestled amongst eucalypt trees and featuring a large outdoor koala enclosure and many interactive displays, the Daisy Hill Koala Centre is a unique place to learn about koalas and their conservation.

The Daisy Hill Conservation Park comprises 435 hectares of open eucalypt forest. It has long been a popular bushland retreat for people, and is home to many native animals including koalas.

If you wish to attend one of our daily Wildlife Officer talks, or enquire about a private talk, please complete a booking form. 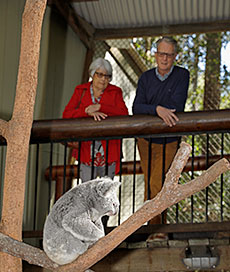 What to see in the Centre

Our resident koalas can be seen from two different level viewing boardwalks at the Daisy Hill Koala Centre.

Visitors are not able to handle or pat the koalas.

Jordan is a young male koala estimated to have been born in the wild in 2016.

Orphaned, Jordan was hand-raised by a wildlife carer.

Unlike the female koalas, Jordan has a scent gland on his chest and a larger, more prominent nose and his chin sticks out further.

If you are lucky, you might be able to witness Jordan practicing his bellow (snore-like inhalations).

All of our female koalas were born in the wild. They have each suffered various illnesses caused by the bacteria, chlamydia. Although successfully treated, the damage caused by the chlamydial infection has left them infertile.

Aretha is an adult female estimated to have been born in the wild in 2013.

Aretha comes from the Wide Bay area and was admitted to the Australia Zoo Wildlife Hospital in February 2018 with ovarian cysts. Veterinary assessment determined that Aretha was infertile due to these complications.

Aretha was moved to the Daisy Hill Koala Centre in August 2018. She can be identified by her very pale grey fur.

Molly is an adult female koala estimated to have been born in the wild in 2013.

In 2016, Molly was brought to a wildlife hospital with signs of cystitis. Upon examination vets also found ovarian cysts.

Molly can be recognised by her pink nose that is caused by a lack of dark pigmentation.

Kyra is a female koala who is estimated to have been born in 2011.

Kyra was admitted to a wildlife hospital in September 2015 suffering cystitis and ovarian cysts.

Kyra is a light grey koala with long, wispy fur on her ears. She is a very good eater and can often be seen chewing on her favourite Eucalypt leaves.

Learn more about koalas by exploring the fun and informative displays in the centre. Take time to:

How to get there

If travelling south from Brisbane on the Pacific Motorway:

If travelling north from the Gold Coast on the Pacific Motorway:

Email us for more information: koala.centre@des.qld.gov.au.

Sightings of all sick, injured, orphaned and dead koalas in South East Queensland should be reported to RSPCA on 1300 ANIMAL (1300 264 625).

Our plants, animals and ecosystems are under threat