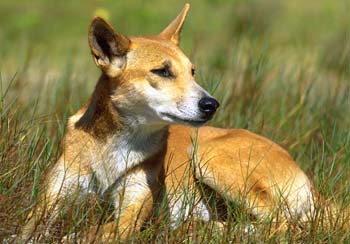 Eye-catching, curious and sometimes dangerous, the dingo can be observed across Australia where they play an important role in the natural environment.

The dingo has a role as an apex predator and is also believed to play a role in keeping natural systems in balance. In addition, dingoes also prey on some feral animals, and in this way can aid the survival of native species.

Dingoes hold a significant place in the spiritual and cultural practices of some Aboriginal and Torres Strait Islander communities. As an iconic Australian species, the chance to observe a dingo in its natural habitat is also considered an exciting opportunity and privilege. This wildlife experience attracts tourists, resulting in flow-on economic benefits. Naturally curious, the dingo will occasionally approach humans but should be treated with absolute caution. Despite looking like a domestic dog, the dingo is a wild animal and can be dangerous.

The dingo can stand more than 60cm high and weigh between 13–23kg, depending on its geographic location. Dingoes are naturally lean like a greyhound, with large ears permanently pricked and tails often marked with a white tip.

Dingoes are social pack animals. Wild dingoes may sometimes appear in poor condition due to naturally occurring health issues or because they have been denied food by more dominant members of their pack. Subordinate and scapegoat pack dingoes are the lowest ranking dingo pack members and receive few privileges, including more limited access to food even when it is available. The variable condition of individual dingoes is consistent with populations of other wildlife species and is not an indication of the overall health of the population.

Where do they live?

From harsh deserts to lush rainforests, the highly adaptable dingo is found in every habitat and state of Australia except Tasmania. Dingoes favour edges of forests next to grasslands. In deserts, access to drinking water determines where the animal can live.

What do they eat?

Dingoes are Australia's largest meat-eater (carnivore) and hunt many kinds of animals. They hunt mainly at night. Depending on the size of the prey, dingoes may hunt alone or in packs.

The dingo is an opportunistic and generalist predator that will search widely for food and eat whatever it finds.

Dingoes generally eat small to medium native mammals, some introduced feral animals and some domestic animals. Discarded food from dumps, camps and fishers are also eaten when the opportunity arises.

Are dingoes considered native to Australia?

The earliest undisputed archaeological finding of the dingo in Australia has been dated to 3,500 years ago when it was likely introduced by Asian seafarers. However, the Queensland Museum notes that recent DNA studies suggest dingoes may have been in Australia even longer (between 4,640 and 18,100 years).

While dingoes look similar to some domestic dogs they are wild and unpredictable and should be respected.

How do they breed?

Dingoes live for about 7-10 years in the wild and can start breeding once they reach the age of one or two.

Unlike the domestic dog, the dingo breeds only once a year. Litters of around six to ten dingo pups are born in areas such as a hollow log or under a rock ledge.

The dingo is considered native wildlife under the Nature Conservation Act 1992, and are protected on national parks. On K’gari (Fraser Island) (Great Sandy National Park) wongari (dingoes) are managed in accordance with the Fraser Island Dingo Conservation and Risk Management Strategy (PDF, 7.3MB) . Elsewhere in Queensland dingoes are a restricted invasive animal under the Biosecurity Act 2014 and must not be moved, fed, given away, sold, or released into the environment without a permit.

What are a dingo's threats to survival?

Feeding of dingoes can also threaten their survival as they learn to associate humans with food through handouts or poorly disposed rubbish scraps. As a consequence, dingoes may become familiar and lose their natural fear of humans. In some situations, defending or fighting for this food may lead to dangerous behaviour being exhibited by the dingo towards people. Dangerous dingo behaviour is managed using current technology (GPS collars), infrastructure such as fencing or dingoes are required to be humanely euthanised as they have the potential to seriously injure or kill people.

While dingoes have the potential to be dangerous to humans, in reality the incidence of attacks on humans is relatively rare. The risk of dangerous behaviour is greatly increased in dingoes that have become familiar and habituated to humans through feeding or other encouragement.

The department's website provides information on how to respond in the rare event of being threatened or attacked by a dingo.

On national parks, any deliberate dingo feeding or negative dingo encounters—circling, lunging, or being chased or bailed up by one or more dingoes, tearing tents or stealing property, nipping, biting or worse—should be reported to a QPWS ranger, or by phoning (07) 4127 9150 or emailing dingo.ranger@des.qld.gov.au as soon as possible. Mobile phone charges may apply.

For all emergencies, phone Triple Zero (000).

The Fraser Island Dingo Conservation and Risk Management Strategy promotes the best outcomes for dingo conservation and human safety, as well as placing a stronger emphasis on the importance of dingo welfare. Read more about the strategy.

The department is focused heavily and continuing to implement actions to reduce the likelihood of dingoes becoming highly habituated and aggressive to people and therefore avoiding the undesirable action of euthanising dingoes. Read more: Dingo management FAQs (PDF, 599.4KB)