When you read information about crocodiles or when you report a crocodile sighting you may come across some terms that mean something different to their everyday use. Here is a list of some of topics and terms with an explanation of what they mean and why they are important.

The behaviour of a crocodile is the way in which it responds to a particular situation, event or stimulus. To ascertain the behaviour of the crocodile, an accurate and detailed description of the events surrounding the sighting is required. Include in this event description:

In a management context, ‘deceased’ means the crocodile was deceased at the time it was reported to the department.

Interfering with and killing crocodiles is illegal under the Nature Conservation Act 1992, and there are substantial fines for doing so. The department investigates reports of deceased crocodiles to ensure no unlawful activity has occurred. In recent years, the department has successfully prosecuted a number of people for the illegal killing of crocodiles.

Some animals will stay on top of the water, heading in a specific direction of travel. Others may submerge and re-emerge in a different location.

It is important to note direction of travel to identify where the animal might be going so the appropriate personnel can be alerted e.g. Surf Life Saving Queensland.

An estuarine crocodile, also called the saltwater crocodile or saltie, is found in estuarine and freshwater rivers, estuaries, creeks, swamps, lagoons, billabongs, coastal areas and offshore islands across Queensland typically from north of the Boyne River near Gladstone, north up through Cape York and west to the Northern Territory border. It is distinguishable by its broad snout, jagged teeth line and long teeth.

A freshwater crocodile, also called a freshie, is found in freshwater rivers, creeks, wetlands and lakes in-land. It is distinguishable by its long narrow snout, evenly-shaped needle-like teeth and considerable smaller overall build and size. There is also a distinguishing row of four large scales on the neck immediately behind the head. 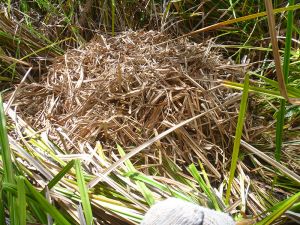 A crocodile nest is where a female crocodile lays her eggs.

Usually between December to April, female estuarine crocodiles construct a nest—a mound of vegetation and soil—along the banks of a watercourse. Throughout the incubation period the female crocodile will protect the nest from disturbance by predators and humans.

It is important to identify possible estuarine crocodile nests as there is usually a very alert and mobile female guarding it.

A sighting is where a crocodile or evidence of a crocodile (e.g. slide, tracks or nest) is seen by a person. Sightings should ideally be reported by the person who saw it (first hand). Second, third or even fourth hand reports are received but these can be difficult to investigate and validate because some of the information is lost with every retelling.

Sighting information does not provide a reliable picture of where crocodiles can or can’t be found. Sightings occur where people are, which is why we receive lots of reports around populated areas. Just because there hasn’t been a sighting somewhere, it doesn’t mean there are no crocodiles, which is why it’s so important to be Crocwise in Croc Country. Remember that crocodiles can be found in any waterway north of the Boyne River in Gladstone. A crocodile slide is a track or mark left behind by a crocodile when they move up, down or through sand or mud banks. It is often associated with a favourite basking spot or shallow water wallow, which can sometimes be hidden from view in mangroves or up a high bank. Slides on a bank are often in a single line as the crocodile has moved up the bank to bask and/or the tide has dropped around it. For large crocodiles, there is sometimes an entry and exit slide mark.

Slides can stay imprinted on the bank for a few days before washing away. If you see a slide, it doesn’t mean a crocodile has just made it.

It is important to be aware of crocodile slides because while you might not sight the actual crocodile, the slides show where it might be regularly basking. 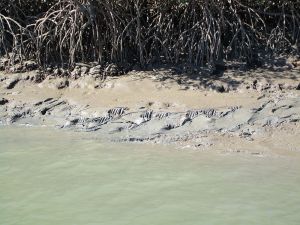 Crocodile tracks are footprints and tail drags left behind in mud or sand when a crocodile travels between waterbodies or looking for food. Tracks help to identify size, density, hierarchy and behavioural patterns of crocodiles in the area.

It is important to note evidence of crocodile tracks because while you might not sight the actual crocodile, the tracks might show where it is travelling.