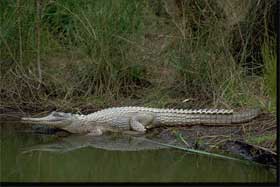 "Freshies", as they are commonly referred to, are endemic to Australia and occur in inland waters of northern Australia. In Queensland, they are found mainly in the rivers and swamps of Cape York Peninsula, areas bordering the Gulf of Carpentaria and the north-west. There are also east coast populations found in the upper Herbert River, the Burdekin River catchment and the Ross River. Freshwater crocodiles also live in tidal reaches of some rivers.

Freshwater crocodiles are grey or olive-brown with ragged dark mottling.

A freshwater crocodile can be distinguished from an estuarine crocodile by its narrow snout and evenly shaped and sized needle-like teeth. There is also a distinguishing row of four large scales on the neck immediately behind the head.

Males reach weights of up to 60kg but rarely grow more than 2.5m long, while their female counterparts grow to 1.8m long and weigh up to 30kg. 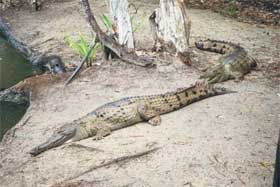 Males reach sexual maturity at around 2m and females at 1.5m, both at an estimated age of 15-20 years.

The breeding season for freshwater crocodiles starts between July and August and nesting occurs from August to September. In contrast to the estuarine crocodile, freshwater crocodiles are known as pulse nesters. This means that all mature females in a population nest within a short period of several weeks, rather than staggered over several months. Between four and 20 eggs, usually about 12, are deposited into simple holes that are dug in sand or soil near the water's edge.

Incubation takes 65-90 days with hatchlings emerging at the start of the wet season, October/November. Unlike most other crocodilians, freshwater crocodiles rarely guard their nests or display any maternal care. Over 70 percent of eggs laid are destroyed by flooding and/or eaten by feral pigs, goannas and snakes. Of the eggs that do hatch, it is estimated that only about 12 percent make it through their first year of life. Predators such as turtles, fish and other crocodiles feed on the unprotected hatchlings. Like estuarine crocodiles low and high temperatures predominately produce females, while middle range temperatures produce mostly males. 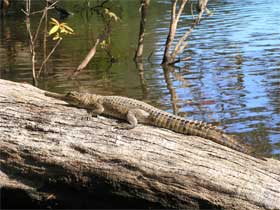 Freshwater crocodiles are active during the day but forage mainly at night. Their diet consists of small animals including insects, fish, frogs, lizards, turtles, bats and birds. Occasionally, small mammals at the water's edge may also be taken.

As with the estuarine crocodile, freshwater crocodiles are also ambush predators that wait for their prey to come close to the water's edge so that they can grab them with their powerful jaws. Freshwater crocodiles also hunt actively in shallow water and areas where water flows over a rocky bottom - an ideal location to hunt for frogs and small crustaceans.