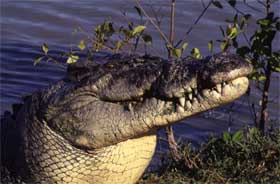 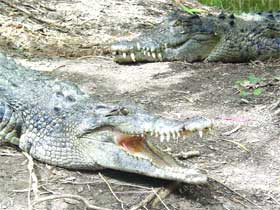 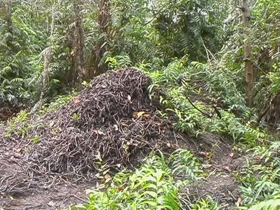 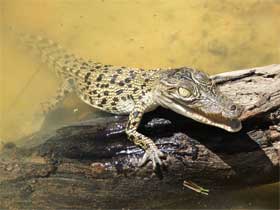 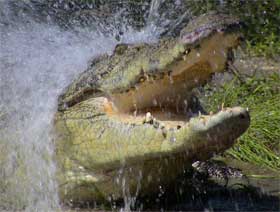 Estuarine crocodiles are found from India to northern Australia, and across to Vanuatu and the Solomon Islands. In Queensland, they are known to occur between Gladstone and Cape York Peninsula, and throughout the Gulf of Carpentaria. Although most commonly seen in tidal reaches of rivers, they also occur along beaches and offshore islands in the Great Barrier Reef and Torres Strait, and in freshwater lagoons, rivers, and swamps up to hundreds of kilometres inland from the coast.

Skin colour varies depending on where they live and their size. Colours range from almost black through to grey and olive-brown, with ragged, dark mottling.

From the side, the jaw line is uneven with irregular-sized rounded teeth. The head is generally broad and knobbly.

During the breeding season, male crocodiles become very mobile as they look for a mate, so sightings are more prevalent. Courtship begins in October/November, with nesting spread over several months from December to April.

The female constructs a mound of vegetation and soil along the banks of a watercourse, usually within 10m of permanent water. This helps to keep the eggs above flood levels - embryos "breathe" through the shell and drown if the nests are flooded. After mating, the female deposits between 40 and 70 oval-shaped eggs, about 8cm long, into the mound. The rotting vegetation incubates the eggs inside the mound, and the temperature and duration of incubation determines the sex of the young. A temperature of 32 deg. C produces both sexes but most are male. Temperatures lower or higher than this result in increasing numbers of females. Very high or very low temperatures kill the embryos. Throughout incubation (approximately 90 days) the female crocodile protects the nest from predators such as other crocodiles, goannas, feral pigs and humans.

Weighing about 70g and measuring 30cm in length, the young crocodiles are fully developed and are able to break out of their eggs. The squawking attracts the mother who may dig the hatchlings out. Unhatched eggs may even be rolled around inside the mother's mouth to help the young emerge. Once out of the mound, the mother may gently carry the young in her mouth to the water's edge. Here, the hatchlings form a créche and remain under their mother's protective care for up to five weeks before beginning to disperse.

Lifespan in the wild is unknown, but estuarine crocodiles are expected to live for 50 years or more. Crocodile in the water.

Young estuarine crocodiles' inherited hunting skills are demonstrated almost as soon as they hatch, with small insects, crabs, prawns and shrimps being among their favourite foods. As they get larger so does the range of potential food items. At sizes of around 2m they begin to take an increasing amount of vertebrates such as fish, frogs, birds, water snakes and rats. Full-grown adult estuarine crocodiles are able to feed on whatever they can overpower - sea turtles, goannas, wallabies, feral cats and pigs, dogs, kangaroos, cattle, horses, buffalo and even other crocodiles. Their keen sense of smell will also lead them some distance from water to scavenge for carcasses.

To capture prey, estuarine crocodiles wait in ambush at the water's edge and then lunge or snap sideways at animals which come to feed or drink. If the crocodile cannot swallow an animal whole, the crocodile either drags it under the water and twists it in a "death-roll" until it dies, or the crocodile will shake its head in an attempt to break off pieces of the animal to eat.